Shires Law can help you with your slip, trip or fall claim. We operate on a No Win No Fee basis, you will not be out of pocket whether you win or lose.

focusing on the individual

Operate on a No Win No Fee basis

How much can you claim?

What’s the process of making an accident claim with Shires Law?

If successful you receive a cash sum. You could receive up to £4,500

Slips, trips and falls are caused by a variety of hazards, such as potholes and stray tree roots; raised paving slabs are a common trip hazard (generally they must be raised in excess of one inch in order to claim). It is your council’s duty in accordance with The Highways Act to ensure that streets and footpaths are safe and to show that they have a regular system of maintenance, inspection and repair in place. If you have been injured due to a slip, trip or fall on the public highway and feel that your council has neglected to see or rectify the hazard, then you are entitled to make a fall claim. 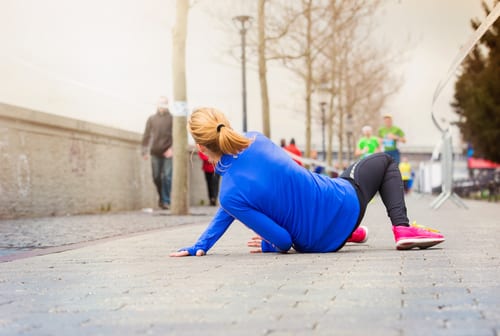 The causes of most common slip, trip or fall accidents are:

Various injuries are sustained by slip, trip or fall accidents:

A person could experience almost any type of physical damage in a slip, trip or fall, if you would like more information on your specific accident then our experts in falls claims can help.

How Much Could You Claim?

The amount of compensation that you stand to receive is very much dependent on the injury you have sustained. Compensation includes; firstly general damages, a lump sum awarded for your injuries and also for special damages, financial losses you have incurred as a result of your accident. An example of a common claim is soft tissue damage or a fracture resulting in a full recovery could be awarded up to £4,500, whereas an accident that causes permanent disability, such as persistent pains could gather in excess of £5,000.

How long will it take?

The length of the claim is also largely dependent upon the severity of your injuries. In these cases a letter is usually sent to the council, after which they have 21 days to acknowledge the claim and a further 3 months to investigate the claim, where liability is then admitted claims can then typically be resolved within a further few weeks. If liability is disputed and litigation becomes necessary then your case could take longer, however courts do work to have any proceedings to trial within 6 months for fast track claims under £15,000. Your case could also be delayed if the injury sustained is serious enough to warrant ongoing medical evidence.

How do you make a claim?

What should you do if you suffer a trip or slip?

If physiotherapy or rehabilitation is required due to your slip, trip or fall, we can provide you with an Immediate Needs Assessment and make sure you receive the required rehabilitation quickly and on a private basis.